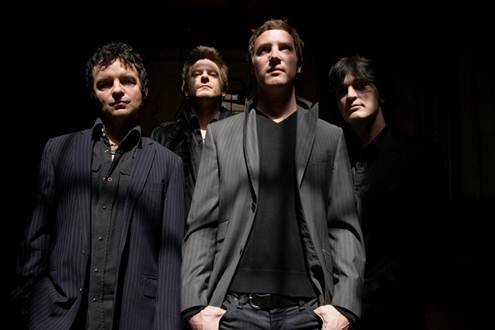 Tickets on sale NOW! Tickets available through all TicketsWest Locations-Safeway- Music Millennium
To charge by phone please call 503.224.8499 or order online at www.ticketswest.com

Candlebox rode the grunge bandwagon to multi-platinum success in the early ’90s, despite howls of protest from the Seattle faithful who considered their music a watered-down version of the genuine article. To be sure, Candlebox’s take on grunge diluted the punk and indie elements inherent in its original form; instead, they were rooted in the bluesy, classic-style hard rock that grunge had ostensibly replaced. Their resulting commercial appeal made them highly suspect in the minds of authenticity-obsessed scenesters, and it didn’t help matters that the band hadn’t formed until well after the Seattle hype machine had begun. Nonetheless, Candlebox unwittingly helped Usher in the post-grunge era; along with Bush, they showed how the more challenging aspects of grunge could be ironed out and polished into a sound that mainstream rock radio could embrace without reservation.

Candlebox were formed in Seattle in December 1991 by singer/guitarist Kevin Martin, a native of Elgin, IL, who’d grown up partly in San Antonio, and drummer Scott Mercado. Initially calling the band Uncle Duke, they added lead guitarist Peter Klett and bassist Bardi Martin (no relation to Kevin) and changed the group’s name to Candlebox, after a line in a Midnight Oil song. Their demo tape found its way to Madonna’s Maverick label, which quickly resulted in a record deal in 1992. Candlebox’s self-titled debut was released in 1993, and while the first single, “Change,” began to build them a following, it wasn’t until 1994, when the follow-up, “You,” appeared, that Candlebox really started to take off. “You” gave them a breakthrough hit on mainstream rock radio, which set the stage for the success of “Far Behind,” essentially a power ballad for the grunge era. “Far Behind” was a major hit on both mainstream and alternative radio, and also made the pop Top 20; its exposure helped Candlebox climb into the Top Ten on the LP chart and eventually sell over three million copies.

By the time Candlebox returned with their second album, 1995’s Lucy, the backlash was already in full swing. Partly because of the group’s previous momentum, the lead single, “Simple Lessons,” earned some rock radio airplay, and the album itself went gold and barely missed the Top Ten. However, it was largely ignored or dismissed by much of the mainstream media, and was ultimately hurt by a relative lack of memorable songs. In 1997, founding member Mercado left the band and was replaced by original Pearl Jam drummer Dave Krusen. Candlebox’s third album, Happy Pills, appeared in 1998 and marked a return to the more basic sound of their debut. “It’s Alright,” “10,000 Horses,” and the title cut all landed some airplay, but the album sold poorly; by this time, countless bands were working in a similar style, and the band’s early momentum had long since dissipated. Krusen departed in 1999, as did Bardi Martin; they were replaced by Shannon Larkin (ex-Ugly Kid Joe) and Rob Redick, respectively, but the group disbanded the following year. The original lineup of Martin, Klett, and Mercado re-formed for a handful of shows in 2006 to support the release of Rhino’s Best of Candlebox compilation. The overall positive reunion stirred rumors of a new studio album, culminating in 2008’s Into the Sun.