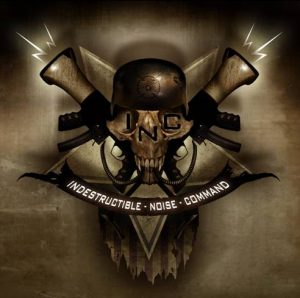 Internationally established thrash metal band INDESTRUCTIBLE NOISE COMMAND and Candlelight Records have teamed up to distribute the band’s upcoming full-length release,Heaven Sent…Hellbound, on it’s new release date, August 9th, 2011.  The album is being released on Rising Records, and is the band’s first full-length offering in over 20 years.

INDESTRUCTIBLE NOISE COMMAND just wrapped up on shooting two new music videos for the singles ‘Fist of Fascista’ and ‘Swallowed’ a few weeks ago in Brooklyn, NY.  A new “behind-the-scenes” video is now available for viewing at MetalInjection.net.  In the video below you can see the guys discussing the shoot and taking part in general tomfoolery on the rooftops of Williamsburg.  The video was shot by director Russell Hasenauer, and the “behind-the-scenes” footage was edited by Kevin Juliff.

Through humble beginnings in Connecticut, INDESTRUCTIBLE NOISE COMMAND exceeded their own expectations and the expectations of others with two successful full-length Giant Records releases, Razorback (1987) and The Visitor (1988). Giant Records signed I.N.C. after witnessing the band’s crushing live performances with the likes of Exodus, Megadeth and King Diamond; all of which taking place only six months after they had graduated high school.  In 1988 with The Visitor, the band hit #1 on the CMJ Metal charts and stole the U.K. #2 Import slot out from underneath Aerosmith. Now based in New York City, the band is back with their Bleed the Line EP and Heaven Sent… Hellbound. I.N.C. is an original pioneer of the thrash metal scene, resurrected in order to take back a genre recently flooded with neo-thrash carbon copies.  Revived and back with a vengeance, I.N.C. is ready to prove ownership of the scene in 2011.