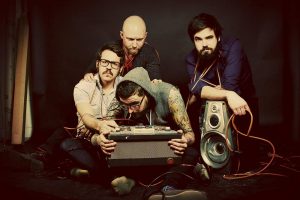 Also on the bill are Mackintosh Braun and Lost Lander (featuring Matt Sheehy from Ramona Falls).  Doors are at 8:30pm, show starts at 9pm.  Tickets are $8.00 advance and $10.00 day of show.

“Priory” is the band’s debut full-length and the follow up to 2010’s “Cold Hands” EP.  The album will be released to retail on June 21, 2011 via Portland’s Expunged Records (home of Blind Pilot).

Instantly infectious, yet not a sugar-pop album that will be easily discarded, Priory walks a tightrope between immediately catchy, instantly warming songs, and subdued, complex layers that take multiple listens to start to unravel and understand the true depth of their work.

“It’s finding that balance between the standard acoustic instruments and partnering them with huge electronic bass and keyboard licks,” says the band’s Kyle Dieker when asked to describe their sound. “Priory is all about tones and where those sounds sit in a song.  Blending folk melodies with pop sensibility, Priory takes from a collection of sounds and brings them together into something that is familiar yet innovative.”

Besides layers of instrumentation that help develop the complexity of the songs, contrasting with the ease of the melodies and hooky-ness of their songwriting, Priory also puts a lot of time into their lyrics.  Developing stories that also take the listener more than a few listens to start to completely digest the power of the music.

From comparing a drug addition to a bad relationship (“Devil vs. Heater”), how our perception of family and the importance of it changes as we age (“Searching”), and self-assessment in dying moments (“Coal Mine”).  To songs about fighting for what you believe in (“Worthy Dreams”), being in a relationship with someone who is always being pursued by others (“Kings of Troy”), and realizing life is short (“Cold Hands”), the latter of which is about a couple dying together in a car crash.  Priory doesn’t shy away from tackling some of life’s scariest questions or the thoughts that we all think, but oft-try to suppress.

They come out swinging; creating music that could simply be described as “beautiful,” reeling you in, but offering up much more for those that take the journey and visit it over and over again.

“I want people that hear our album to feel something,” admits Johnson.  “Some of our subject matter is not all that light and fluffy, not unlike life, but I believe there is always a positive side. There is a glass half full, if we choose to perceive it that way.  And, a little nursery rhyme melody can often add a sense of whimsy to a dark subject matter.”

It is that contradiction that builds up and develops throughout the album, with the band toying with the playfulness of it all, while taking everything very seriously.

“Every song on the album means something to us. We did not want there to be any filler,” Johnson adds.

With the record complete, and a band itching to play live, the group plans to hit the road throughout spring, summer, and fall and tour relentlessly. In their new, revamped bus, putting on an amazing live show and converting people the old-fashioned way: one fan at a time, one club at a time, one city at a time.  And, for Priory, that just feels right.  As organic and natural as their songwriting process comes an organically grown fan base.