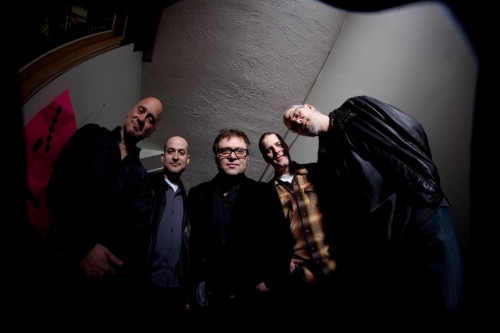 PORTLAND, OREGON-BASED ROCK ACT, WILKINSON BLADES TO RELEASE THEIR DEBUT CD, “4:00 AM”, JUNE 9TH AT SECRET SOCIETY BALLROOM.
Portland, Oregon-based rock outfit, Wilkinson Blades will celebrate the release of their debut, 4:00 AM, June 9th at Secret Society Ballroom.  Centered around songwriter/vocalist/guitarist Steve Wilkinson, the band is rounded out by Johnny Huck on bass, Jon Beyers on drums, Grant Cumpston on guitar and backing vocals, and Rich Lander on keyboards, mandolin, and backing vocals.

4:00 AM, which will be released nationally on indie label Shiftone Records (an Austin, TX-based label), is an eleven track collection of rootsy-pop, Stones-y rock, sunshine pop, and rainy-night melodies.  Recorded by Wilkinson and friends at various studios, the making of the album was unlike any of Wilkinson’s other projects (including Gravelpit and Mission 5). There were no expectations, no pressures, and certainly no constraints put on the music. The only goal was to make a record Wilkinson would be proud of, could play for his friends, and not have to compromise with members in a band setting.

“I was busy with Mission 5 at the time, making records, writing, and playing lots of live shows,” comments Wilkinson, discussing why his debut solo record took longer than any of his previous records to make.  “All of the bands I have ever played with had a sense of urgency as far as schedules go and getting records out on time and on a tiny budget.  I wanted this record to be done on my time, without rushing and without worrying about deadlines.  Needless to say that with a five-year project I more than accomplished my goal by about four years.”

Playing the majority of the instruments himself, Wilkinson wasn’t without his friends on this record, including them as much as he could, assembling a band without the confines of a band.

“I really wanted this to be a huge group project without the idea of a ‘band’ being behind it.  From writing, to arranging, to all of the instruments, backup vocals, production and engineering, this was exactly what I set out to do when I decided to make this record,” Wilkinson proudly proclaims.

“All of these people made a huge difference in how the record sounds.  I am really proud of the fact that I could pull together some of my favorite musicians in Portland and mash it together in an album that sounds like me, while at the same time showcases their contributions to the record.” He pauses, then continues.  “It sounds like me but even better, even though most of them weren’t in the studio at the same time.  We made it sound cohesive, and I’m very proud of that.” Although it was never planned, the band has currently started playing out live and gaining a loyal following – an unlikely twist to the original scope of the recording project.

Leading off with “No Exit,” a song Wilkinson wrote while on the road with Gravelpit during a Rocky Mountain region tour, Wilkinson’s distinct gravel and smoke rock pipes let you know this record is going to be a musical journey. Few artists can pull off a strong rock song like “No Exit” and later in an album write a country number, without having it sound out of place or forced.  However, Wilkinson pulls it off with the banjo number “Someday,” a song he beams about when discussing. “The song is about acknowledging my own double standards and owning up to stuff rather than blaming it on someone else.  Since this is somewhat of a new outlook, I decided to do it in a new style.”

And then there is the buoyant, summertime pop of “Sunshine Now,” written in Portland, at night, during rainy and dark weather, offering up a glimpse of warmth and clarity while the sky showered the city with sheets of rain.
A highlight for Wilkinson is the Lee Hazelwood cover, “Some Velvet Morning,” a subdued, yet inviting blurry-eyed number that pays tribute to Hazelwood while allowing Wilkinson room to commandeer it as his own.  Same goes for “Crippled Mind,” a song penned by legendary Northwest songwriter Chris Newman for his post-Napalm Beach outfit Snow Bud and the Flower People.

The end result: Wilkinson accomplished what he wanted.  He made a record that truly sounds like him, that he is unabashedly proud of, and the culmination of his musical past and history.
Visit Wilkinson Blades online at:Reverb Nation:  http://www.reverbnation.com/wilkinsonblades