by Anne Steiner photos by Buko 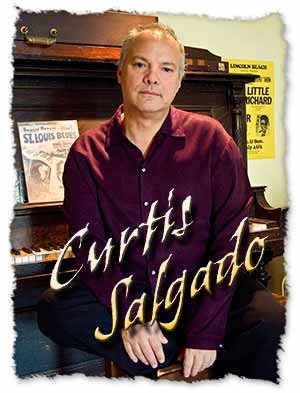 I asked Curtis Salgado:
“If you could only keep three albums from your record collection, which ones would they be?”

First Choice: “Hate to See You Go” by Little Walter
“It’s the quintessential Chicago Blues with the best Harmonica ever.”

Second Choice: ”Night Beat” by Sam Cooke
“He was and still is the BEST singer. Sam Cooke changed the way it was done. I could listen to it all day, every day.”

Third answer: “The Clones of Dr. Funkenstein” by Parliament “You’re not giving me enough choices!”

I knew my interview with Curtis Salgado was going to be satisfying when one of the first things we discussed during our phone pre-meeting was soul singer Millie Jackson. Matter of factly and with absolute precision, Salgado summoned up one single, but perfect adjective to describe the 70’s soul matron: “Raunchy.” His description came readily, as it would from one who knows R & B music in its finest obscurity.

Our real interview began on a sunny afternoon at Salgado’s Southeast apartment. Curtis and his Tour Manager, Scott Craig, greeted me as they returned from a music store. I was invited inside but within minutes of my arrival, a neighbor showed up bringing Salgado his mail; Trumpeter David Mills (Soul Vaccination) arrived at the door with Mac Book in hand, ready to upload horn tracks he was arranging for Curtis’ band, and the telephone rang. Orchestrating the chaos in his home as the seasoned bandleader he is, Salgado opened his mail, situated his guests in a room covered with wall to wall bookshelves (which were loaded with hundreds of Blues, Soul and R&B CD’s, LP’s and Videos) and took care of his phone call before rejoining us in a matter of minutes.

It was interesting to watch him at work off stage.

Seating himself cross legged on his floor, pulling CD’s from disorganized piles spilling from bookshelves onto his carpet, Salgado interspersed business transactions with Mills; discussing particulars of the songs he wanted horn arrangements for, while he talked about his lifetime love of Blues and R&B music. “I started listening to this stuff when I was a kid and I never stopped. I don’t think I even owned a pop record until 1991.”

Whether discussing Johnny Guitar Watson, who Curtis describes as “the original gangster of love,” who he believes was as talented and musically apt in the 60’s and 70’s as Prince is today, or Larry Williams, who was running a burglary ring at the same time he was producing hit soul records, Salgado speaks definitively and precisely about the musicians, the music and their personal history, referencing little-known facts and adding bits of provocative shading that only voracious scholars would know.

“Life is short, and when you’re told yours is about to end, REAL SOON, you start appreciating things in a different way. You don’t want to waste your time on the things that got you nowhere before.”

While playing cuts from CD’s for Mills to rearrange, Salgado discussed his style of performing and how he writes and selects his songs, “I get inspired by the music I love,” he says, “I’ll write a song thinking of something that O.V. Wright or Sam Cooke did years back, or if a song hits my heart – if no one else has covered it, I’ll think about doing it,” he states, simultaneously punctuating horn parts on the CD with a hand burst or closed- hand punch, gesturing to Mills’ who is typing notes on his computer,

As conversation ricochets from audiences to recording in L.A. to the new outlook on his career, Salgado shares thoughts on each with equal intensity.

“My favorite shows are played for the people who want the full experience. People who buy tickets and who pay a baby sitter and who choose to spend their evening coming to see me perform,” he asserts, “The music and the show business, the performance, go hand in hand. I run my show like it’s like an old soul review – snap, crack, crack. We walk into the applause and don’t start talking to the audience until I’m 5 or 6 songs into a set – I like to get them to ride the wave – take them up, up, up and then I’ll bring them down with a ballad, slow things up a little and then work them up again. I’m very much into the show biz aspect.”

Just as he is on stage – magnetic, commanding and precise – he is also in the comfort of home. Well into the midst of the interview, as yet another acquaintance shows up at his door, shouting through the screen door – “Squirtus! Are you there?” Without skipping a beat, Salgado invites the friend in, informs him he’s in the middle of an interview, and then proceeds with finishing his thought. Perhaps the most surprising thing about Curtis Salgado, which I found contrary to his rather cocky and coolly-polished stage persona, was his relaxed and casual openness.

As the discussion switched from music to his health, he acknowledges his desire to seek out more positivity in his day to day experiences. “Life is short, and when you’re told yours is about to end, REAL SOON, you start appreciating things in a different way. You don’t want to waste your time on the things that got you nowhere before.”

Amazed, still, by the miracle of his eleventh-hour liver donor and by the overwhelming support of musicians and fans at his benefit concert in Portland in 2006 (6,000 attended the show at Theatre of the Clouds, which included performances by Steve Miller, Taj Mahal, Everclear, the Tonight Show horn players and others), Salgado talked openly about the people in his life who were there for him, mentally and financially, through the process. At one point, he recalls being brought to tears when he heard of the local generosity and outpouring of love by people he hardly knew. Other benefits were played across the country as well: in San Francisco, Chicago, San Diego, San Jose, Seattle, Eugene and Omaha, which Salgado calls “The kindest city.”

“I love Omaha,” he offers earnestly, referring to the town where he received his transplant. “Everyone there was so helpful and kind and willing to make it happen for me.” Scott Cramer, summed up the benefits succinctly “It was like a great big surprise party for Curtis – all over the country.”

Yet, considering the notoriety Salgado has gained throughout his career as an R&B performer and songwriter (he was the inspiration behind John Belushi’s Blues Brothers; he’s toured and performed with the most respected Blues and R&B musicians in the world: Albert Collins, Robert Cray, Roomful of Blues, Stevie Ray Vaughan, Bonnie Raitt and Carlos Santana), he maintains a boyish enthusiasm when he talks about his new record and working with The Phantom Blues Band (Michael Finnegan, Johnny Lee Schell, Tony Braunagel and Larry Fulcher), a group of high caliber L.A. studio musicians whose credits include work with Bonnie Raitt (Nick of Time), Neil Young, Etta James, Delbert McClinton and Taj Mahal. The band had been wanting to record with him for 2 years and when they finally got him into the studio, Curtis describes the magic that happened.

“These guys are amazing to work with,” he says. “First of all, they really wanted to work with me. Second, they’re incredible pros – we put so much down in such a short period of time. They’re in it a hundred percent. They really go the distance to be creative and hammer songs out in the studio.”
The new album, produced by Marlon McClain and Anthony Braunigan, also matches Salgado with Nashville songwriting collaborators David Dunkin and Kevin McKendree. In addition to Salgado’s original material, he’s received songs from outside sources like Tommy Simms, who wrote the Eric Clapton hit, “Change the World.” Simms has sent three songs for Curtis to consider.

To date, Salgado has recorded seven songs for his new album and is currently writing and gathering new material. He hopes to iron out schedules to resume recording early next year, but a busy tour schedule through the end of year adds to his challenge. And even with the promise of his new industry heavy associations, Salgado maintains a relaxed view about any future success. He reminds himself that, though it would be nice to reach the next level, it’s not the most important thing to him anymore.

“Before my transplant, I wanted different things from my music – I wanted a Grammy, I wanted to play huge halls, I wanted a song on the charts. Now, I don’t really care. When you’re told you have 8 months to live and then get a new chance at life, your priorities kind of change. I’m much more grateful for what I have than I was before.”

Editors Note; this interview was published originally in 2007.