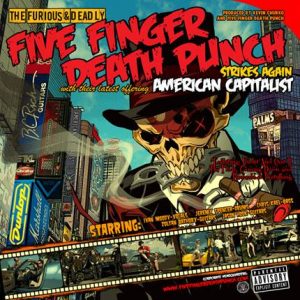 NEW SINGLE “REMEMBER EVERYTHING” SHOOTING UP THE ACTIVE ROCK CHARTS

FIVE FINGER DEATH PUNCH have already made headlines with one of the year’s biggest rock album debuts.  American Capitalist entered at #3 on the Billboard Top 200 in early October and has already sold over 165,000 copies in just a few weeks. Fans can purchase the album on iTunes here. Now, less than two months after the release of the record they’ve got some more news.

Starting this Tuesday, November 22nd, fans will be able to get the brand new cover art for 5FDP’s current album. It features an illustration of the band’s ubiquitous “mascot,” Knucklehead over the backdrop of Time Square in New York City.

“We are the people’s band, and a lot of fans really liked this alternative artwork we had on the tour posters. So many times we heard, “THAT should be the album cover” – so we figured we’d make it happen,” explains Bathory.  “If you like the original cover, that’s cool too – I guess the original will be somewhat of a limited item from now on, so there you go.”

The new Knucklehead illustration will only be replacing the regular edition album version of American Capitalist, while the deluxe edition artwork will remain the same.

FIVE FINGER DEATH PUNCH are still out on the road on their headlining Share the Welt Tour with All That Remains, Hatebreed, and Rains. The tour has been a massive hit, selling out most venues along the way – getting rave reviews for its solid line up and over-the-top visuals.

Jessica Mero, Head of Marketing at Eagles Ballroom in Milwaukee relates. “5FDP‘s show was an intense metal spectacle – a perfect show by a great rock band! Over 4,000 frenzied fans filled the venue and we had to turn away hundreds who showed up too late to buy their tickets at the door.”