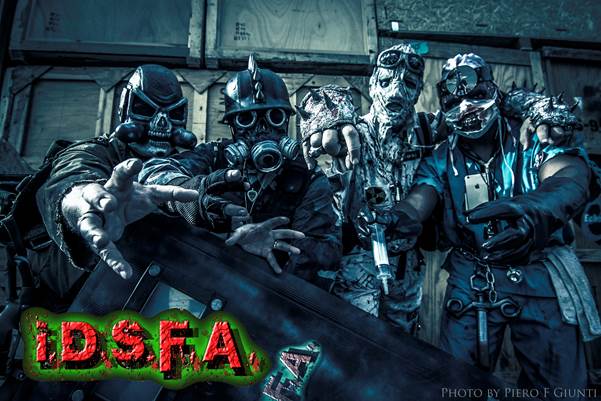 Vegas Shock Rockers I.D.S.F.A. Pay Homage to Orderus Urungus with “The Genius That Was Oderus”

Check Out a New Track “The Genius That Was Oderus”

Las Vegas-based shock rockers I.D.S.F.A. – winners of the 2011 “Best Shock Rock” and 2013 “Best of Vegas” Vegas Rocks Magazine Awards – released their first full-length self-titled album in 2013, including tracks about revenge, death, mayhem, zombies and all things gruesome. Pairing the audio with a chaotic live show featuring drum beating zombies, an 8-foot anti-aircraft gun, washed up sea creatures from the Japan tsunami and other surprises, the group has amassed an assembly of fans who are rabid for what’s coming next!

The group aims to continue the carnage with their upcoming concept project Bodies In The Basement, which will include a new album, as well as short film and live, interactive performance aspects. In addition, the new music will feature an overhauled sound and demented new vocalist, Knuckletooth. In celebration of the upcoming release, the band is paying homage to their main musical and theatrical inspiration, GWAR, as well as late vocalist Dave Brockie, with a new track “The Genius That Was Oderus”.

The track can be streamed here via the band’s official YouTube page: https://youtu.be/pUWkKKzpoiU. Fans can also download the track via Amazon now, or receive the track as a hard copy single (only 100 signed, numbered copies available) by donating to the IndieGoGo campaign below. Please note that this track is only available via single and will not be part of the Bodies In The Basement album.

Bassist Travesty comments, “We wrote “The Genius That Was Oderus” in memoriam of one of the most influential musicians to us. We have attended GWAR shows since we were teenagers. Oderus showed us that you can mix music, horror, gore and theatrics into one. He is the reason that I.D.S.F.A. is the band that is today. We wanted to show our appreciation to everything Oderus did in the Shock Rock scene and we figured what better way to do that than in song – the way he would appreciate the most. He Will Be Missed, So Raise Your Fist!”

As mentioned above, the Bodies In The Basement full musical and theatrical production is almost complete, but I.D.S.F.A. is reaching out to their fans to help finalize the process! The band is hosting an IndieGoGo campaign with the goal of funding the upcoming three-part production, which if reached, will include live performances that include interactive personifications of each track’s concept, in addition to live airings of an accompanying short film in segments between tracks.

As for the album portion of the project, I.D.S.F.A. plans to present the same short film broken up between tracks on their actual album (the concept is for fans to experience the album via multimedia player to hear tracks and view the short film in segments between each track, in sequence).

The short film concept will follow the story of one victim and their journey through the macabre world of I.D.S.F.A. This film, combined with the album and live aspect of Bodies In The Basement, will take the audience through the horrors one might experience if “Chosen” by I.D.S.F.A. Who are “The Chosen”, you ask? To understand that, one must understand who I.D.S.F.A. are at their core.

Drummer Dr. Skum tells the tale, “We’re a group of miscreants who met in hell many lifetimes ago, eventually becoming one of the most popular and influential bands in the underworld. After getting carried away at an after party one night, we happened to roofie Satan with a dose of our own concocted drug called “Demon Puss” and things got… X-rated. After that fateful night, we were banished to the Town Of EEV-Ville, a town located 66.6 miles south of hell. This is the place where the ones who are too evil for hell are sent. Once we arrived in the town of EEV-Ville, we got a bit of cabin fever and decided to get busy, forming what is now known as The Dept. Of Death. The Dept.’s mission is to tour the world and spread our infection to all! Once infected, those will then follow alongside the Dept. on their tirade of Death. Those infected are called “The Chosen” and they will not stop till death has reached every corner of the globe! *evil laugh*”

The Bodies In The Basement IndieGoGo campaign will feature some great incentives, such as two incredible custom I.D.S.F.A. guitars by Evolution Guitars. These guitars feature a new innovative guitar design with interchangeable face plates and are valued between $1400-1800 each. These will be available for a discounted price via the IndieGoGo campaign with a $1000 donation. You will be given the opportunity to work personally with the design team and customize your guitar with them – truly be one of a kind! Learn more about Evolution Guitars here: https://www.theevolutionguitar.com/

Other incentives include a limited-to-100-copies hard copy of the “The Genius That Was Oderus” single (mentioned above), drum sticks, custom skateboards, and more.

I.D.S.F.A. is endorsed/sponsored by Evolution Guitars, SIT strings, Zombie Apocalypse Vodka, and Clayton Picks, and have performed with groups such as Mushroomhead, D.R.I., Anvil, Spineshank, and more.