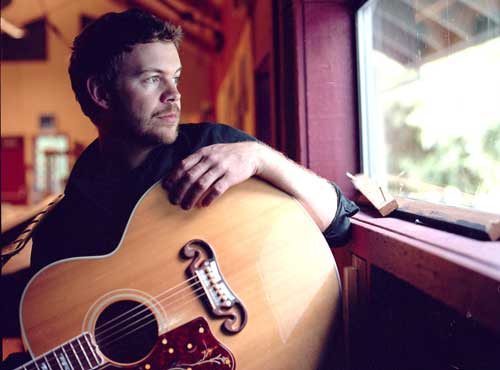 Also on the bill is Richmond Fontaine (headlining) and The Low Bones (opening).  Doors are at 8pm, show starts at 9pm. Tickets are $10 advance, or $10 at the door.

We’ve all lost friends and loved ones along the way.  Some to natural causes, others to health-related problems, while some to unexpected events.  All are tragic, in their own way, and each leave a lasting effect on us.

“If there’s any gift the winter brings, it’s the deathless scent that seeds the spring,” Marshall sings in “Every Time the Wind Blows,” summarizing the album (and thus Marshall’s) outlook on life and life’s tests.

“Every season lends itself to the next, both literally and metaphorically in terms of the seasons we experience in our own lives,” Marshall examines, discussing the line.  “The most desperately seeming situations often produce the most profound growth, just as the winter makes way for the spring.”

Discussing interpersonal/relational betrayal (“Thirty Pieces of Silver”), love (“Can’t Wait to Take You Home”), loneliness, incomplete, and feeling as if you have no home (“For Too Long Now”), and life having ultimate dominion over death (“Every Time the Wind Blows”), the album carries heavy subject matter while pondering life.  But, it isn’t without its good-times and uplifting moments.

“Killing Time,” for example, is a playful honky-tonk romp, which gives the album an upbeat, cheerful dance number to kick back and enjoy.

“I wrote the entire song in the car without a guitar and performed it that night,” recalls Marshall, admitting that more than a few times he’s written a complete song in his head before ever picking up the guitar.  “I wanted to try writing a song with that classic country cleverness.”

Marshall isn’t afraid to write pop or love songs, which is evident with “We’ll Carry On (My Love),” which uses lyrical interplay between scenes of disparity and moments of ascendance: night and day, peaks and valleys.

“When I sing it I’m drawing upon the experience of making it work with my wife in the difficult economic times we’ve faced the last couple years.”

“I Found You” is another love song on the album, winding through the process of finding contentedness in love, beauty, and joy.  It’s an ode to the simplicity of love, Marshall will tell you.

The son of a preacher that founded his own church, Marshall grew up with religion at home and even played and led the church’s music.  This influence is reflected on the gospel-inspired number, “A Hallelujah Song.”

“The song has an obvious gospel influence and feel, but it is far more than that for me,” says Marshall.  “It explores spiritual and existential frustration with the human condition of unknowing and mystery. I wrote itin desperation and want it to express an element of unsettledness. It has also taken on a depth of meaning during the recording process that was unexpected and tragic.”

The result is a country record that pays homage and tribute to the forefathers, such as Kristofferson, Nelson, and Cash, but also gets Marshall’s voice across, figuratively and metaphorically speaking.

Now, the only thing left for him to accomplish with “August Light” is to get as many people as he can to listen to it.