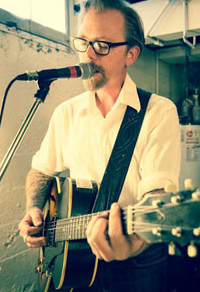 A few weeks ago, Portland stalwart musician Pete Krebs was diagnosed with cancer.  Pete had Hodgkin’s Lymphoma in his early 20s, and through radiation and removal of some lymph nodes, he beat it. However, Pete has now been diagnosed with another type of cancer known as desmoplastic melanoma.    Pete goes into surgery next week and will have a second biopsy taken from his neck.  From this surgery, we will know how far the cancer has spread and what Pete’s chances are for survival.
This sad news has rocked the local music community. Pete has inspired so many of us over the years, through his direct musical partnerships and his ever-evolving, Herculean contribution to the music scene that is Portland.  Portland’s musicians have swiftly rallied around Pete to help his family offset some of the immense costs of medical care and lost wages incurred while Pete is in recovery mode.
Three separate benefit shows have been scheduled, with donations administrated by the Jeremy Wilson Foundation, a non-profit organization that helps provide a safety net for musicians in times of medical crisis.
As many of you know, Pete has genre-hopped over the years, with his past bands Thrillhammer, Hazel, Golden Delicious, The Gossamer Wings, The Kung Pao Chickens, and current projects The Stolen Sweets and The Portland Playboys .  He may be the only person alive to have headlined both CBGB’s and Preservation Hall.  Not surprisingly, Pete’s benefit shows reflect the divergence of his musical paths, and there’s something for everyone.
SWING FOR PETE
Wednesday, February 20, 2013    Doors at 4:30 pm; Show 5:00-11:00 p.m.
The Secret Society  www.secretsociety.net
Featuring: Brent Martens Combination, Boy & Bean, The Stolen Sweets, Swingtime PDX, Itty Bitty Bang Bang!, Nina Nightshade, Pink Lady, Hai Fleisch, Everything’s Jake, The Jenny Finn Orchestra, The Midnight Serenaders
Sliding scale donations starting at $20.00.  All donations are tax-deductible.
ROCK FOR PETE
Thursday, February 21, 2013   Doors at 5:30 pm; Show 5:30 pm-12:30 am
The Wonder Ballroom  www.wonderballroom.com
Featuring:  The Dharma Bums, Black Prairie, Colin Meloy, Sean Croghan, Casey Neill, Lewi Longmire, James Low
Sliding scale donations starting at $25.00.  All donations are tax-deductible.
SILENT AUCTION & RAFFLE!  Those interested in donating to the raffle/auction, contact Alex Steininger below.
FOR PETE’S SAKE
Friday, March 15, 2013  The Laurelthirst Pub  www.laurelthirst.com/    More info TBD.  Contact Bill Leeds below.
In Pete’s own words today:  “My family and I are immensely honored by and grateful for the support we’re receiving.   We can’t even begin to express our humility and thankfulness.”