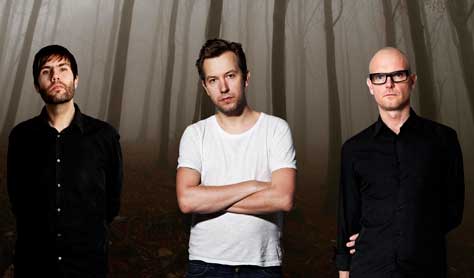 On April 11, 2011, Portland and San Francisco-based independent recording label Badman Recording Co. will celebrate the release of The Bell’s “Great Heat,” the latest from a Sweden-based post-punk/melodic pop outfit.

Listen to “thebell_today“ from the new album Great Heat.

Samples of previous press for The Bell:

“I Am History finds singer Mathias Stromberg waxing philosophic in a cold-wave deadpan that sounds like a less throaty version of House of Love’s Guy Chadwick.” – NPR ‘Song of the Day’

“No matter what comes next, I get the feeling a lot of people will be paying attention.” – KEXP ‘Song of the Day’

Hailing from Malmo and Stockholm Sweden, The Bell are a three-piece with a penchant for memorable melodies and drum machine-driven, classic, alternative songs. Vocals and instruments are shared by the trio of Nicklas Nilsson, Mathias Stromberg, and Jan Petterson. Though they live many miles apart, they co-wrote and recorded “Great Heat” together through e-mail, electronic file exchanges, and Skype.

“Great Heat” is the follow-up to their strikingly good 2007 release “Make Some Quiet.”

Being a band living in separate cities does have its challenges. All was going splendidly while recording the album until it came time to sequence it.

Nicklas says: “We were mainly working through mail and chat and I guess we should have had some more calls or a meeting to clear things more easy. A couple of days into the process everything went chaos. We rapidly cycled through stages of consensus to massive conflicts. Beasts from a biblical hell took turns in throwing series of harsh words at each other and I recalls some gloomy but now amusing quotes”:

“OK, I quit the band!”
“You can do whatever you want with that record. I’m not in it any more.”
“You can redo the vocals yourselves. I am not going to give in to just anything.”
“Fuck this! It’s really not worth it.”

“I am not sure how it happened,” he continues, “but we finally ended up with the first sequence that we had came up with and we are all very happy with it now. The group’s wiry and catchy post-punk pop has had some significant success with sync placements on television. Vampire Diaries, MTV:s Jersey Shore (we agree that one’s a bit weird) as well as the ABC shows Greek and Kyle X/Y have all featured tracks from the debut Make Some Quiet.”

Instrumentalists Nicklas Nilsson and Jan Petterson keep the music tense and propulsive. One is occasionally reminded of favorite, seminal band’s – such as Maps, Stars, Magnetic Fields and The Cure when spinning their music.

But, “Great Heat” comes with a more developed sound than their previous, wonderful offering, and leads like a trip through computerized sounds and a balanced choir of voices to support the nostalgic glam-rock style.

The riffs, the strings, the cold vocals – it’s all there. Colored with the brilliant splashes of history this is a new and fresh take on the breathy 80s daydream. “Great Heat” delivers an immediate impact of songs that stick in your head after just one listen.