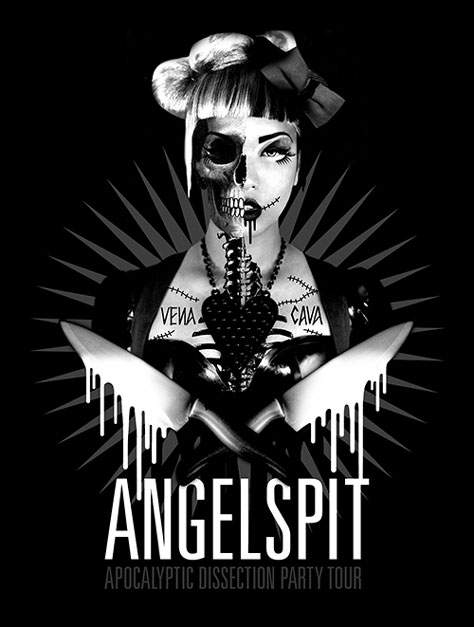 March belongs to the raging cyberpunk musical force Angelspit, who team up with international acid house/industrial sensation Lords of Acid to stomp their way across the United States in their joint March 2011 “SonicAngel” tour.

The “SonicAngel” tour will span the month of March, encircling the United States from Los Angeles to Atlanta, Chicago to Phoenix and more. Joining the onslaught along the way are one-man acts Radical G and Chant. While details are being kept closely-guarded, it is known that the “SonicAngel” tour is Angelspit’s last tour under their current line-up.

During the tour, Angelspit will release Carbon Beauty, the second installment in Angelspit’s Hideous and Perfect remix series, through Metropolis Records on March 8. The album brings 10 remixed tracks and three exclusive songs. For further information on Carbon Beauty, visit www.angelspit.net/carbonbeauty.

Angelspit are an electro-ballistic-punk act hailing from Sydney, Australia, known for vicious distortion, biting lyrics and harsh drums. Angelspit have churned out eight releases over the past seven years and have shared the stage with acts such as KMFDM, Skinny Puppy, Frontline Assembly, Sisters of Mercy and Nitzer Ebb. The band’s music and performance have been recognized and critically acclaimed through numerous media outlets. For further information, visit www.angelspit.net

One comment on “SonicAngel Tour stomps through Portland, March 4”