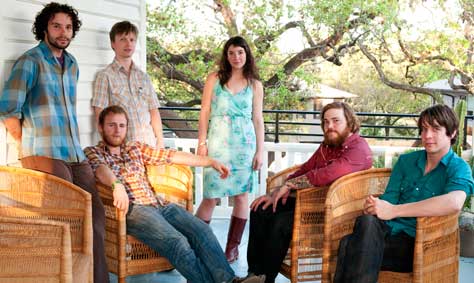 Portland, OR-based Blind Pilot, who are currently in the studio recording their second full-length album, will support The Decemberists’ upcoming European tour.  The tour begins on March 4th in Dublin, makes stops in many UK cities as well as Amsterdam and Antwerp, and concludes with a show on March 16th at Hammersmith Apollo in London.  See below for a full list of tour dates.

The band’s debut, 3 Rounds and a Sound, earned Blind Pilot coverage on national radio (NPR’s “Morning Edition” and “All Songs Considered”), and national television (“Last Call with Carson Daly”). The album received praise from USA Today, the Boston Globe, the New York Post, Wired Magazine, AM New York, and the Philadelphia Inquirer, which calls the music “a rustic reverie.”

“…the songs on its marvelous debut, 3 Rounds and a Sound, are uniformly sturdy and sweet, drenched in brightly rustic instrumentation and some of the sweetest harmonies this side of such likeminded peers as The Avett Brothers and Fleet Foxes.” – NPR Music