New Video for ‘The Ultimate Sacrifice’
to Debut at MetalSucks.net on Monday, March 7th 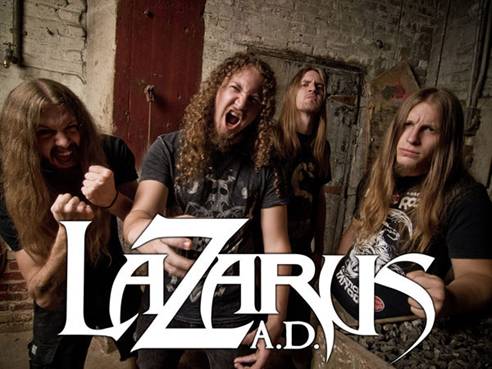 Wisconsin thrash metallers LAZARUS A.D. have just posted four exclusive photos taken on set during their music video shoot for ‘The Ultimate Sacrifice’. Head to the band’s official Facebook page to view the photos, and make sure to tune into MetalSucks.net next Monday, March 7th to witness the unveiling of the new video.

MetalInjection.net recently finished posting a series of video blogs chronicling “The Making of Black Rivers Flow”. Check out the final installment at this link. The behind the scenes footage for the series was filmed by the band and produced/edited by Clay Cook at Dirty Cheese Design & Development. Check out all of the previous installments at MetalInjection.net.

Black Rivers Flow was released on February 1st on Metal Blade Records and is already seeing some amazing numbers on the charts. The album landed at #35 on the Billboard Top New Artist Albums chart, and #86 on the Billboard Top Hard Music Albums chart. Black Rivers Flow also charted at #90 in Canada on the Hard Music charts. LAZARUS A.D. and Bonded by Blood are touring in Europe this spring. See below for all current European and U.S. tour dates.

Here’s what critics are already saying about Black Rivers Flow:

“LAZARUS A.D.’s Black Rivers Flow is meticulously perfect. The guitar solos are reminiscent of Slayer, the riffs remind me of Coroner, Atheist and Testament, and the precision of the guitar work brings to mind Metallica and Megadeth.” Altsounds.com

“This band is in no danger of suffering from a sophomore slump (the title track is especially wicked).” MetalSucks.net

“The album wraps up with the seven-minute ‘Eternal Vengeance’, which builds from a mellow vocal introduction reminiscent of James Hetfield’s (Metallica) somber moments to the crunching heaviness that defines the rest of the album. It too is a strong and, in a different way, expansive cut. LAZARUS A.D. have taken a big step forward with Black Rivers Flow and kept the killer instinct intact. No flash in the pan, this is a band to watch in 2011 and beyond.” Blabbermouth.net

“LAZARUS A.D. gets a lot of things right on Black Rivers Flow, namely the classic thrash feel, the headbangability and the incorporation of a second, very different vocal presence. Just be careful listening to this while driving. This album might make you a little reckless. RIYL: Metallica, Lamb of God, Pantera, Five Finger Death Punch, Goatwhore.” TheNewReview.net

For more information on LAZARUS A.D. visit the following locations: