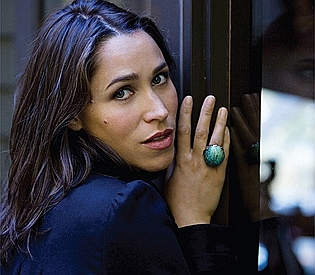 China Forbes has been forced to take an extended hiatus from her duties as Pink Martini vocalist. Suffering an injury to her vocal cords earlier this year, at first it was hoped that an extended respite might restore her to health. But it has since been determined that she will require throat surgery.

Forbes, 41, debuted as a singer with Pink Martini in 1995, when she was recruited by bandleader Thomas Lauderdale. The two of them met while attending Harvard University. It was there that they developed an idiosyncratic musical relationship. After graduation, they went their separate ways, with China developing her own craft as a folk/rock singer/songwriter. Subsequently, Lauderdale asked her to perform with Pink Martini on their first album Sympathique. The rest is local music history.

It is not Forbes’ first absence from the ensemble. She was out for six months in 2009 on maternity leave. But this instance is of greater concern for her future as a singer, in that her vocal cords are involved, and there is no chronology as to when a recovery might be expected, nor assurance that her voice will necessarily return to its former grandeur.

While China is out, Lucy Woodward will replace her for performances in the final week of June, and Storm Large will take over for July shows as well as for an upcoming European tour scheduled for this September. But, more importantly, we wish for China a speedy and complete recovery.